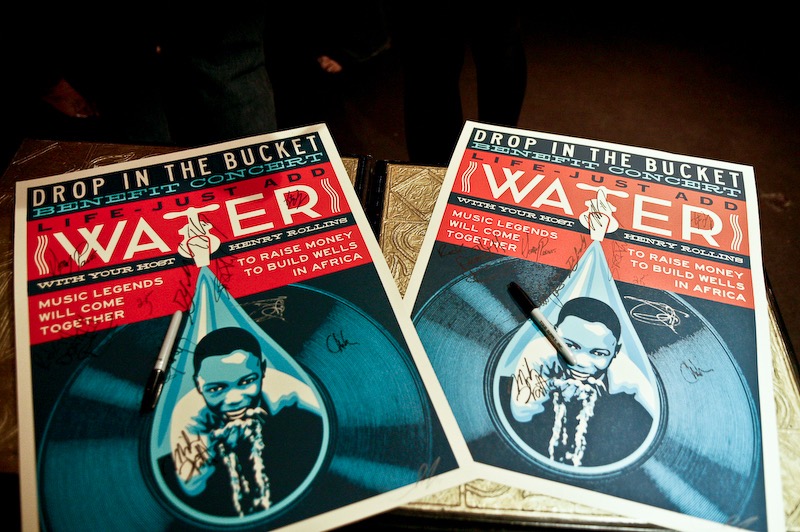 Wednesday night punk rock’s biggest overachiever Henry Rollins hosted a benefit concert for Drop In The Bucket, his current favorite charity, and a bunch of his friends dropped in to say hello. And by ‘say hello,’ I mean take the stage and shred, and by ‘friends’ I mean music legends like Corey Taylor of Slipknot, Scott Ian of Anthrax, Dave Lombardo of Slayer, and Dave Navarro of Jane’s Addiction. The event was held at the historic Avalon Ballroom in Los Angeles and all proceeds went to benefit the NGO founded by John and Stacey Travis to help bring clean water to schools in the war torn region of Africa between Southern Sudan and Northern Uganda.

While Rollins’ interest in Africa pre-dates his involvement with the organization by several years (he initially visited the continent simply because he realized he had been nearly every where else in the world), it was after Drop In The Bucket asked him to speak at an event about water shortages that he realized he had a lot to say on the matter, and wanted to do more about it. Since then Rollins has been heavily involved with the charity’s cause. As he puts it, “Imagine going home and the water in your tap was not a sure thing. You, me, doesn’t matter who you vote for, how rich you are, a few days without water and you’re dead. A lack of water will kill any living thing. This is what people deal with on a daily basis. Water is life as they say, kind of the beginning and end of it. And to be able to help people whose futures hang in the balance of your humanity is so needed, so worthy, so righteous, such an amazing humanitarian thing to do.”

Rollins speaks with passion and conviction, and it’s easy to see how he was able to rally the other musicians who made this night so special (and Drop In The Bucket’s biggest fundraiser to date). As former bandmate Kira Roessler (who took the stage to perform with The Minutemen’s Mike Watt with their two-bass group DOS) put it, “Henry just lights up when talks about it. I just think the whole idea is so fundamental, and so amazing.” Rollins’ dedication was clear when I asked him (a man famously vocally opposed to the current Republican candidates) if he would go on a date with Michelle Bachmann to raise one million dollars for Drop In The Bucket, with an extra million for making out with her. “I’d do it! Of course… When you see these kids at these schools, when you see what the water means, when you see all these beautiful hydrated children, it’s so moving. There’s nothing you wouldn’t do.”

The night rounded out with all of Rollins and all his pals taking the stage for an epic set of covers including “Everlong” by the Foo Fighters and “Crazy Train” by Black Sabbath. Watching all these heavyweights gathered to play their hearts out for this cause, beneath a slideshow of the faces of beaming African children all personally touched by the work of Drop In The Bucket, one can’t help but feel momentarily part of something much bigger than oneself. Or in Rollins’ words “That’s what the test of this century is going to be. People giving outside of their own area of concern and responsibility, or at least acknowledging their area of concern and responsibility to be larger than their dinner plate, their county, or their state, or their own country’s borders.” Last night 1,500 of us, in a small but meaningful way, did just that.