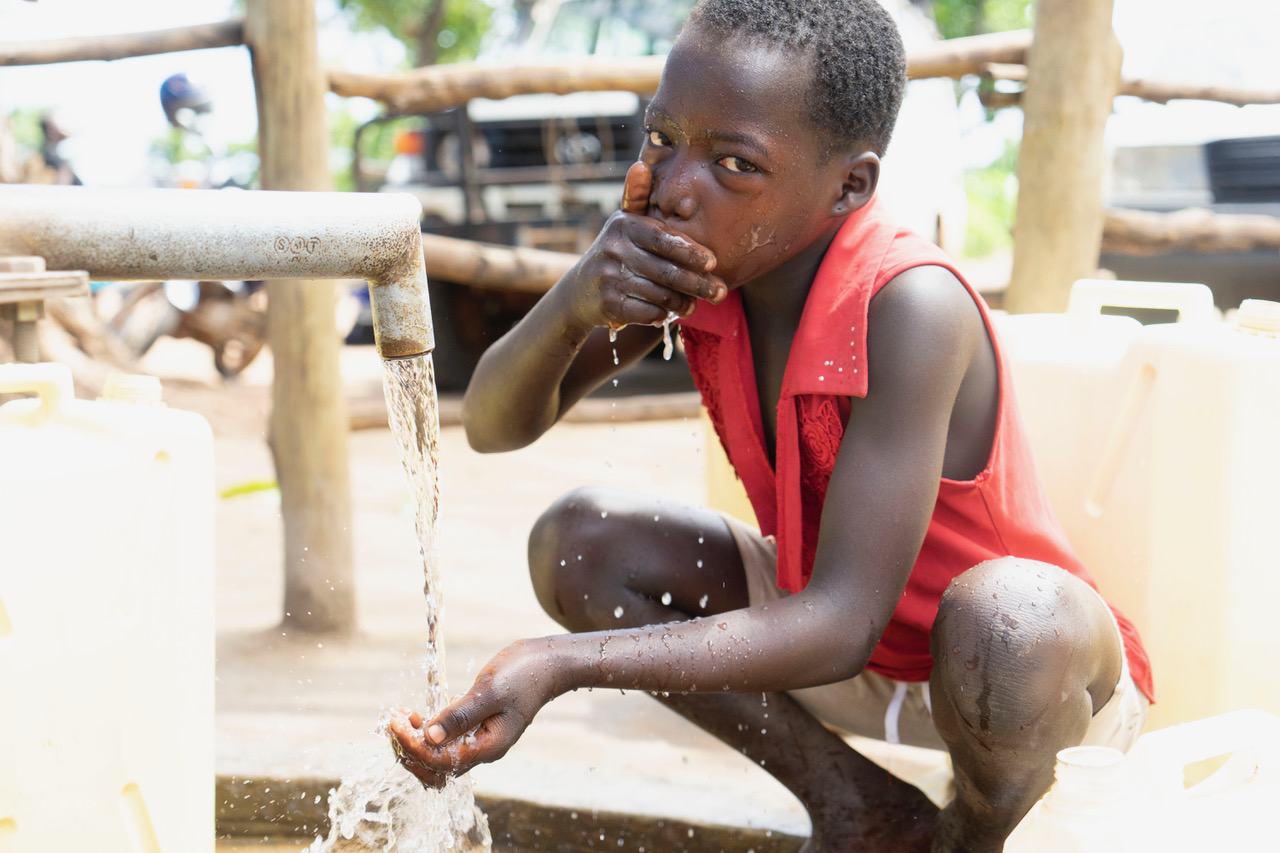 This is an excerpt from the day:

Over breakfast I sat with Thomas Liere, our WASH Officer, and planned the activities for the day. We had a lot of new wells to see in the settlement but the roads were dangerously muddy and there was a major storm brewing. We needed to get an early start to beat the downpour.

Our team is comprised of Ugandan and South Sudanese nationals. For most of them, war, displacement and crisis have been part of their lives. For many, their formative years were spent either watching the war swirl around them, being corralled into refugee camps or serving in the military. Your options are limited when you are a child of war.

We spent the day handing out Pack H2O backpacks to refugees for carrying water. It is difficult to imagine leaving all of your belongings and lifelong memories behind to flee fighting. They say that donors are growing tired of the global refugee situation. But after spending time with this community today, I hope it is not true. They need us now more than ever.

As we worked today, Thomas began telling me stories from his childhood. His father had been a village doctor but he died when Thomas was young. And like so many other children in this region, being the oldest, he was then expected to care for his mom and five siblings. But Thomas refused to quit school because he knew the value of an education and he had big dreams.

But at the age of twelve, Thomas’ world changed forever. He saw his first airplane – an Antonov bomber from the Arab-controlled north. It had come to drop bombs on them. The country was at war.

Like most men and boys in the region, he first tried to register for the army. But the recruiters turned him down due to his size and age. As the fighting escalated, Thomas’ entire community was forced to leave their homes in search of safety. They knew that anybody who stayed was at risk of being killed, either by the bombs, the soldiers, or hunger and sickness.

The women and children from his community began walking. They had heard about a safe place across the border. There were rumors of the journey taking a month to travel on foot. And walking was their only method of transportation. Thomas’ siblings were full of questions. How long would they walk? Would they ever be able to return home? Would there be dangerous animals along the way? What would they eat? And would they need to cross rivers? None of the children knew how to swim.

Luckily, after walking several hours, they were picked up by a UN truck and driven to the Kenyan border. For the next nine years, the Kakuma Refugee Camp would be home to Thomas and his family.

Everything in the camp, from food, to soap, to firewood was purchased using ration cards. But education was free and Thomas took advantage of that. As the war raged on, the camp became increasingly overcrowded and everybody grew more desperate. Although there was barely enough to eat already, the family decided to sell half of their rationed food. They were familiar with being hungry and needed to find a way out.

With time, Thomas saved enough from selling food to buy a bike and started a bicycle taxi service. With the money he made, he was finally able to leave Kakuma and enroll in a nearby university. For the next fifteen years, he struggled in and out of school, depending on the security situation, availability of funds or family obligations. In 2007, the at the age of 23, Thomas reached a milestone – he bought his first pair of shoes. Until this point in his life, he had never owned a single pair of shoes. And in 2017, ten years after that, he finally graduated with a Bachelor’s Degree from Wau University.

Thomas is now giving back to the community he loves. He spends his days working with the refugees. He organizes trainings for water management committees, well maintenance and repair, and hygiene promotion. He seems proud of his struggle and accomplishments and you can tell that the children in the refugee camp look up to him. People in this region know first-hand that war is completely destructive. It is all they have ever known. They also know their children are the only hope for a peaceful future.

At the end of the day, although the grey clouds and threat of thunderstorms stalked us nonstop, we escaped the rain. But talking with Thomas and the refugees living in the camp, really put a human face and personal story behind the refugee statistic we all hear. Everybody you meet out here has a traumatic tale of their journey. War leaves nobody undamaged. But their stories are not finished yet.

As the sky began clearing up and the sun came out, I realized that there was a lot of hope in the people I had met today. They hear rumors that the world is growing tired of them – the global refugee crisis. But these are people, not statistics. And if we have any humanity left in us, we cannot turn our back on those who are helpless and displaced because of war and turmoil. We have to continue to cheer them on, give them faith in the future and encourage those children to believe they have the power to change their lives.